Six months after the disaster of March 11, 25 years after Chernobyl, and 66 years after the end of World War II, radiation fears, expectedly and heavily, wear on the collective Japanese psyche.  I saw very few advertisements for art museums, much less smaller galleries, in my six weeks in Japan—how do the Japanese cope with having lived through multiple nuclear disasters if not through art?  Under the weight of such fear, a country could sink into oblivion, but there are some creatives who understand the “resilience of nature“, and that life goes on after such a cataclysm.  One of these creatives is Hayao Miyazaki, a Japanese artist, director, and founder of Studio Ghibli, an animation company based outside of Tokyo.

Best known for his films and manga (Japanese graphic novels) such as Princess Mononoke, Spirited Away, and My Neighbor Totoro, Miyazaki also directed a music video that deals with the aftereffects of a world that experienced nuclear meltdown, “On Your Mark”.

On Your Mark – Chage & Aska from bahimas on Vimeo
(There’s a version in English, as well).
When I heard that JAXA was located near the Studio Ghibli Museum, I jumped at the chance to go.  What would this museum show me about Ghibli’s creative process?  What other ideas were Miyazaki and his collaborators generating in their studios?  Joined by two members from the lab, we took the 14 bus across the street from JAXA up to the Ghibli Museum in Mitaka. Getting tickets is a bit of a chore, and can only be done in advance through a travel agency or through vending machines at Lawson convenience stores in Japan. Many thanks to Morita-san for acquiring tickets.

Located in Mitaka, not far from the Kichijo-ji neighborhood, and bordering Inokashira Park, the museum is surrounded by verdant trees, shrubs, and vines.

How to get to the Ghibli Museum

The day of our visit dawned dark and grey, making picture-taking prospects as grim as the sky. Fortunately, the rest of the Internet had better luck in terms of weather during its visits, including Todd Fong, who captured a wonderful view of the museum exterior.  Think Laputa: Castle in the Sky meets New Mexico adobe with a touch of glass-enclosed San Francisco modern architecture. (For the rest of this post, if you see an image with a caption directly below, clicking on it will take you to its original context, not my Flickr stream.) The stained glass, especially this one of the Shishigami and Kodama from Princess Mononoke, was phenomenal. (Perhaps I’ll dust off my glass cutters and grinders and begin creating stained glass again…) The exterior details were phenomenal.  Imagine creating a space where every little thing mattered, where every chair, faucet, drain cover, and finishing piece was perfect.  The Ghibli Museum was a place where all of these elements were cared for and realized.

Nausicaa.net, a treasure trove of all things Ghibli, has the cutaway layout of the museum.

The layout of the Studio Ghibli Museum

Photographs are not allowed inside the museum, and with good reason: you’d drain your battery and fill your memory card in approximately five minutes, and prevent hordes of other Miyazaki fans from appreciating the exhibits and displays.  There are some brave netizens who’ve photographed parts of the interior, including the stunning ceiling fan that looks like it’s made of airplane wings.

The main entrance to the Studio Ghibli Museum

The roof, where we started after climbing a two-and-a-half-story spiral staircase to a secret passageway, was fair game.  The robot from Laputa: Castle in the Sky greeted us as we emerged onto the green roof and explored the gardens. The boys paused to hug the robot, and Morita-san did his best comedic poses. Plants grew out of the back of the giant soldier. Tani and Morita-san have control of Laputa! Coming back down from the roof to the third floor of the building we saw a GIANT PLUSH CAT BUS from My Neighbor Totoro.  Sootballs from Spirited Away kept it company, just don’t wiggle them at your friends.  Unfortunately, only children under the age of 12 are allowed to climb on it.  It was perhaps the most delightful thing I encountered in my total time in Japan.  (An adult-sized catbus was available for sitting inside, but not climbing.)

The children's catbus at the Ghibli Museum

Also on the third floor was a gift shop (Mamma Auito, from Porco Rosso) and a reading room, Tri Hawk, a play on the name of the town, Mitaka (三鷹, “three hawks”).

The upstairs galleries showed what the Ghibli animators’ workshops must look like, filled with inspiration in the form of toys, baubles, Little Prince references, daruma figurines, art supplies, paintings, photographs, and not a small number of airplanes.  One photograph doesn’t even begin to describe the space, cluttered yet showing the process of how films go from sketches to fully fleshed works of moving art.

The animators' workshop at the Studio Ghibli Museum

The first floor was where things came to life.  We wandered through recreated sets of bakers shops, the Shishigami’s forests, and old world villages.  Three dimensional zoetropes used models of creatures rotating on a turntable hit by strobe lights to demonstrated more tangible animation, giving you the impression that a Totoro was walking, a bird was flapping its wings, or that trees were growing. Inside the Ghibli theater

Your ticket to the small theater contained actual film cells from reels previously wound through the classic projector.  Mine contained excerpts from Porco Rosso.  The film we saw was Mei and the Kitten Bus (めいとこねこバス), a sequel to My Neighbor Totoro in Japanese, and subtitled in hiragana so that children could read.  I could understand about 20-30% of what was written, and more from context!  Having not seen Totoro, some of the subtleties were perhaps lost on me, but the film left us all grinning. Morita-san handed me a small plush kitten bus as we left. どもありがとうございました、守田さん！ 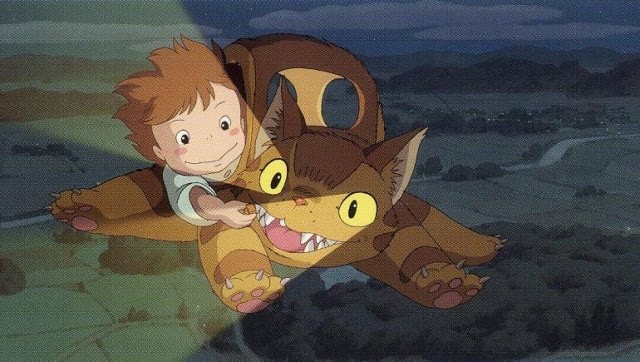 Mei and the Kitten Bus

I broke the interior photography ban… in the women’s bathroom. Richly colored, it felt like I was in a French farmhouse.  Dried herbs and flowers hung from the ceiling.  False windows looked out into painted scene of a garden and a nearby farmhouse. The sink fixtures and warmth of lighting reminded me of the bathrooms at Skywalker Ranch in Nicasio, California. Do rich eccentric filmmakers all decorate their washrooms in the same manner? While we didn’t stop at the café, it’s worth a look at the latte art resplendent with Miyazaki artwork served at the museum. As we left the museum to catch the bus north, we encountered a giant Totoro prepared to take tickets at a ticket window.

Thank you, Miyazaki-san, for creating the most enjoyable museum.